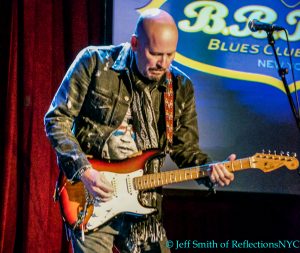 Inspired by the rich musical legacy of the American south, rocker Scott Holt has been a bearer of the Blues torch for his entire career. Scott began his musical journey at 19 years old, when he jumped on the fast-track by joining his friend and mentor Buddy Guy as second guitar during the most successful period of the Legend’s career. Scott’s 10-year tenure with Buddy Guy established him as an incredible guitarist, a rich, soulful singer, performer, and storyteller in his own right. He got to travel the world with Buddy and along the way has met and played with many of his heroes. People like Eric Clapton, Carlos Santana, Albert Collins, Double Trouble, the list is endless. He has a tremendous respect for tradition and says you need to know the history of the blues to really understand and play it. Any time Buddy and Scott are in the same area, Buddy always invites his friend up to play and it is something to see!

In addition to his tenure with Buddy and playing on the GRAMMY winning record Slippin’ In, Holt’s seven (7) solo records’ have established him not only as a six-string powerhouse but also as a penetrating and soulful singer & storyteller.

In 2014 Scott met Roger Earl of Foghat. Roger had fractured his back a few years prior and had to have friend & drummer, Bobby Rondinelli, sit in for him for eight shows during his recovery. Then another band member had surgery and the band scrambled to find someone to play booked shows for a couple of months. With that in mind, the band decided that everyone needed an ‘understudy’ in case of an emergency so the show could go on and the fans could rock to Foghat’s music. Scott Holt was suggested as a likely candidate and Roger invited him down to their Florida studio (Boogie Motel South) and along with Craig MacGregor and Bryan Bassett they rehearsed the set. He did a fantastic job, and the band knew that he could be relied upon if needed. They all just hit it off and became good friends.

During this period Roger, Bryan & Scott were hanging out and writing songs for the fun of it. The creative juices were flowing and since Bryan Bassett is not only Foghat’s guitarist but also their engineer and producer, they recorded all the tracks. Then in 2015, they had an opportunity to be an ‘audio engineering graduation project” at Dark Horse Institute in Franklin, Tennessee, Working with the students and staff at Dark Horse was a unique and inspiring experience. Their enthusiasm was contagious, and the result was six great tracks including three original recordings. So now what? They decided they would release these as a ‘side project’ but they needed a name. One evening, over a few glasses of wine, Bryan came up with the name EARL & THE AGITATORS.

EATA released a four song EP in 2016 and another full-length CD “Shaken & Stirred” in 2018 which debuted at #11 on the Billboard Blues Charts!

Along with Foghat bassist Rodney O’Quinn, guitarist Tony Bullard & percussionist Mark Petrocelli, they formed a touring band and played a number of gigs (when time permitted given the busy Foghat schedule) and it was evident these guys were having a really good time.

Scott got up and played with Foghat often, and when the band began work on their 2016 studio album UNDER THE INFUENCE with producer Tom Hambridge, Scott was invited to be part of the writing & recording process and ended up co-writing a couple of songs and singing lead vocals & guitar on three tracks: “Upside of Lonely”, Honey Do List” & “All Because of You”.  He also played guitar on four additional tracks: “Under the Influence,” “She’s Got a Ring in His Nose, “Made up My Mind” & “Hot Mama”.”

Now in 2022, when Foghat lead singer, Charlie Huhn, decided that it was time for him to retire, the natural choice for his replacement was Scott Holt. The rest is now history in the making!!!   Let’s rock!