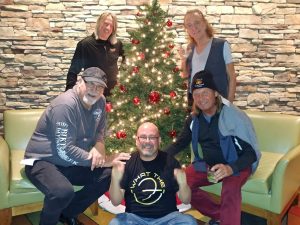 While many bands from the classic-rock era are known for having one or maybe even two signature Christmas songs in their arsenal, Foghat actually have more than a few in their collective quiver — not surprising, really, given that Foghat have never been a band for doing what anybody else does, anyway.

In order to celebrate the pure joy of the holiday season in the proper FoghatWay, I recently Zoomed it up on multiple occasions with founding drummer Roger Earl and the band’s ace lead and slide guitarist Bryan Bassett to discuss the origins of Foghat’s perennial holiday cheer and why their renditions of all these wonderful holiday songs endure, and then asked them to share their personal holiday wishes to all Foghat fans across the globe. Do join us here beside the holiday fire, won’t you? 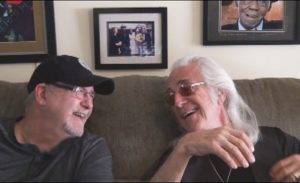 One of Foghat’s earliest Christmas celebrations on record came with their raucous cover of Chuck Berry’s beloved 1958 holiday chestnut “Run, Run, Rudolph” (a song also known by its alternate title, “Run Rudolph Run”), which initially appeared on a Bearsville Records promotional 45 single in 1978, and has since appeared in the Rarities portion of Disc 2 on the 2012 Edsel Records 2CD compilation that also includes all of Girls to Chat & Boys to Bounce, In the Mood for Something Rude, and Zig-Zag Walk as well. (As is the case with most of the Foghat holiday songs we’ll be discussing here, “RRR” can also be found on a number of holiday-related compilation discs and digital holiday playlists alike.) 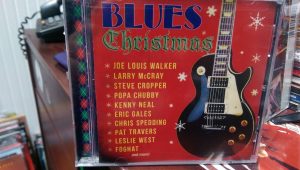 “We did do a version of that song — but it’s not me playing drums on it,” Roger reveals of this roof-burnin’ track that features the indelible Lonesome Dave Peverett on lead vocals, ax maestro Rod Price on slide guitar, and Craig MacGregor on bass. Why wasn’t Roger on it, you ask? One very good (and/or very bad!) reason. “What happened was, I was whisked off to the hospital because I had appendicitis! I was feeling really, really ill at home at the time, and I just couldn’t get out of bed. It wasn’t a lot of fun. When I finally got to the hospital, they took one look at me and said, ‘Oh, we’re opening you up right away!’ Lucky for me, it was literally caught in the nick of time. So, yeah, that’s why I wasn’t playing drums on that one — our manager did.” (Not to worry, fellow FoghatFans — Roger did ultimately get to play “Run, Run, Rudolph” onstage with his ’mates back in the day.) 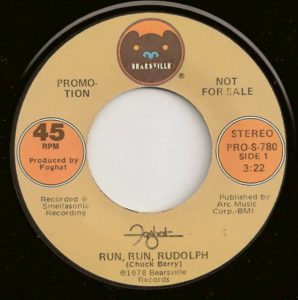 When I suggest the Foghat of 2021 could easily recut their own version of the song now and call it “Re-Run Rudolph” instead, Roger agrees with a hearty laugh. “You know what? Both Charlie [Huhn, lead vocalist/guitarist] Rodney [O’Quinn, bass] and Bryan would be up for that!” Bryan grins his approval while Roger pauses briefly, then sings one of the song’s most familiar lines, “Run, Run, Rudolph, Santa’s gotta make it to town!” — before adding, “Yeah, maybe we could do that as some kind of single for next year.”

Next up is “All I Want for Christmas Is You,” another promotional Bearsville Records 45 single, this time coming from the December 1981 incarnation of Foghat that featured Lonesome Dave on lead vocals and guitar, Erik Cartwright on lead guitar, Craig MacGregor on bass, and Roger Earl on shakers, and was produced by longtime Foghat compatriot and one of the band’s former bassists himself, Nick Jameson. “All I Want” also makes its appearance on CD as the last track on Rhino’s 1992 offering, The Best of Foghat, Volume 2, as well as at the very end of CD2 in 2006’s double-disc Rhino set, The Definitive Rock Collection. 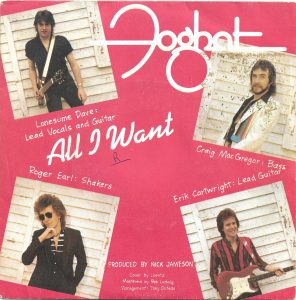 “All I Want” is pure, classic Lonesome Dave, who wrote the song and made sure to give it a good ol’ skinny-tie-era rockabilly spin. Also take note of the track’s boogie-woogie piano lines and totally wailing saxophone solo in the back half, complete with Dave’s reverb-drenched play-by-play vocal encouragement. “What’s that from, the Girls to Chat & Boys to Bounce era?” ruminates Roger. (In a word: Yes!) “I mean, I must have done it, but I don’t recall playing it! And that’s unusual for me, but there you go. It’s a really fun holiday song, though!”

Following “All I Want” a few years later came the two-sided December 1986 single, “Goin’ Home for Christmas” backed with “Santa Claus Is Back in Town.” This self-released 45 featured E.J. Burgeson on lead vocals and guitar, Erik Cartwright on lead guitar and vocals, Craig MacGregor on bass and vocals, and our man Roger on drums and “libations.” A promotional video made for “Goin’ Home” — which is easily accessible on YouTube if you’ve never seen it, or want to revisit it, STAT — shows the band in full holiday reverie as they first emerge from their tour bus on the side of a highway, attempt a few tentative dance steps right next to it, perform in a packed club, and share a few backstage hijinks and hotel banquet hall dinner follies, plus they’re seen playing the song in the snow with a pair of formidable Marshall amp stacks in tow. (Incidentally, a certain repeat lyrical reference to “a long Slow Ride” is no mistake either, just in case you were wondering.) 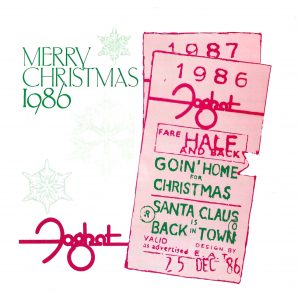 “We recorded that one around Thanksgiving at a studio down in Tallahassee when we had only a few days off,” Roger confirms, “but we shot some of the video where it was snowing and cold. It even got some airplay on MTV at the time.” When I ask Roger about the, er, “nice try” of the four guys trying to perform their dance moves in sync near the side of the bus, he immediately confesses, “Craig was the choreographer that day, but I think he lifted it off a ZZ Top number! Craig said, ‘Let’s do this,” and I said, ‘Alright’ — but then I f—ed it up, so never mind! It was all in good fun for the holidays, right? But I do want you all to know I was quite the dancer in my youth, and I could cut a rug with the best of them!”

Side B is quite notable for the starring role Roger takes on Leiber/Stoller’s “Santa Claus Is Back in Town” as the song’s ostensible narrator, a role he continues to relish to this very day with various recurrent filmed readings of holiday favorites that continue to pop up online here, there, and everywhere. This particular version, however, includes a quite delicious aside when Roger goes, “He sees you when you’re sleeping? I don’t think so!” Of the song itself, our favorite narrating drummer lad notes, “It was fantastic fun doing that one! The kids really like it — and we like it too! Actually,” Roger muses, “We’ve been thinking about re-recording that one.” (Well, who knows — a new Earl of the Holiday reading of sorts just might show up online any day now if you’ve been nicer more than you’ve been naughty, so keep your eyes and ears peeled accordingly!)

Finally, we come to Foghat’s galvanizing instrumental version of “Winter Wonderland” that was released digitally in 2013 and has since shown up on various compilations and playlists. “Winter Wonderland” features some of Bryan’s textbook, tasty-af slidework on the song’s instantly recognizable melody lines, surrounded by a vibrant holiday-party-in-progress atmosphere and some perfectly placed sleigh bells to boot — not to mention a mid-song break where Roger makes a, shall we say, positive festivity-reinforcement exclamation all his own. “We were down here in Deland, Florida,” Roger recalls, “and we were talking about writing a new Christmas song, or maybe even doing another version of ‘Run, Run, Rudolph.’ We were going through a bunch of different things, and I think Bryan came up with the idea of doing an instrumental — and, of course, his playing on it is absolutely brilliant! It was a different take for us, but it was fun.” 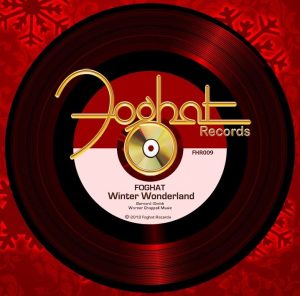 Adds Bryan, “We really did just do it for fun, like Roger says. We were talking about songs that would fit our style, and we wanted to figure out something I could play on slide. I mean, most Christmas songs are in major keys and are pretty easy to play on slide guitar — but I just love that song, you know? From a guitar standpoint, I started noodling around with different positions until I found the second chord, and that’s what fit the song.”

Before we leave you with visions of sugarplums and/or Foghat videos dancing in your collective heads, I asked both FoghatMen to share why Christmas songs and other holidays tunes seem to touch folks so deeply, and what the holiday season means for all of us.

Bryan first: “My favorite holiday song, of course, is ‘Let It Snow!’ — the original version. Everybody loves hearing Christmas songs, whether you play them around the tree, the campfire, or wherever. The Christmas songs we choose to play in Foghat just fit in with our overall feeling about how we want our music to affect people.”

Roger gets the final word: “Well, the holidays are important because it’s all about being with your family, putting up trees, buying presents, drinking wine, and dancing with your best friend. We hope everyone enjoys the holidays, wherever you are, and we’ll see you all very soon!” 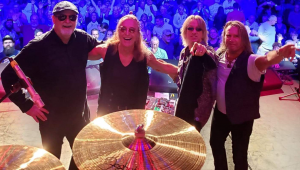 Merry Christmas to all, and to all a good FoghatNight!!!

Next month, in FoghatStory: Join us in this space in early January 2022 as we celebrate the 48th anniversary of Foghat’s third studio album, Energized, which was released by Bearsville Records on January 6, 1974. See you all then, fellow FoghatFans!!!