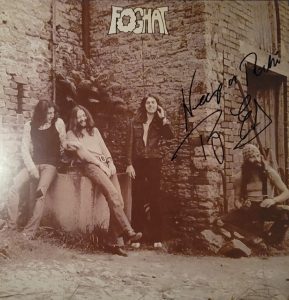 Foghat’s self-titled debut studio album Foghat was released 50 years ago today by Bearsville Records on July 1, 1972. Produced by Dave Edmunds — the Welshman then known for his time as the guitarist/vocalist for blues-rockers Love Sculpture, and later as an acclaimed solo artist, producer, and leader of the short-lived pub-rock supergroup Rockpile — the nine songs and 38 minutes comprising Foghat laid the groundwork for a stellar career that’s still going strong today (and perhaps even stronger than ever, I’d say). Without Edmunds’ steady hand behind the board, coupled with a) the four-man band’s inherent understanding of and deep respect for the blues, and b) their unique ability to transform the tenets of that very sacred music genre into the burgeoning rock & roll idiom, Foghat may not have even gotten out of the starting gate.

“I know for a fact that without Dave Edmunds’ input and his producing this record, it would have been nowhere near as successful as it was,” declares Foghat founding drummer Roger Earl. “And it probably wouldn’t have sounded anywhere near as good either. Thank you, Dave Edmunds. Absolutely brilliant!” (Hear, hear!) 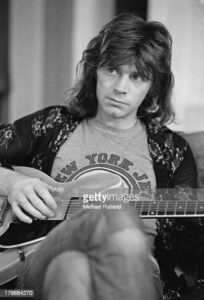 As most of you reading this know, Foghat came to be when three members of the blues-lovin’ British band Savoy Brown — namely, vocalist/guitarist Lonesome Dave Peverett, bassist Tony “Tone” Stevens, and aforementioned drummer Roger Earl — decided to strike out on their own in 1971. Once they connected with former Black Cat Bones slide guitar maestro Rod Price, Foghat was truly born. 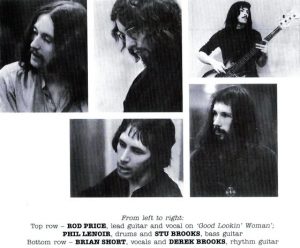 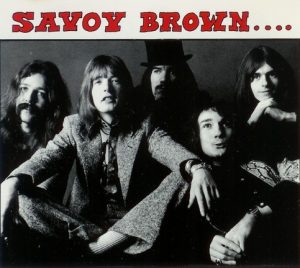 How good a job did Foghat do with their holy mission from the outset? Well, if anybody knows about bands being able to back up their blues-bred bonafides, it’s the right Rev. Billy F. Gibbons, ace guitarist/vocalist of ZZ Top — a.k.a. that little ol’ band from Texas — for 50-plus years and counting.

“Even today, it’s a well-known reality that it was the British guys like Foghat who unexpectedly wound up rescuing an artform that ran the risk of evaporating into the abyss,” Gibbons told me recently, not long after sharing a bill with Foghat at the Thunder Valley Casino Resort in Lincoln, California, back on June 4. “Things may have taken on a slightly different complexion since then, but the artform still remains.” Of that recently shared bill with Foghat, Gibbons adds, “What a great, great night it was for those in attendance. Weather permitting, we totally had hours and hours of fun.” (Having attended a few shows outdoors at Thunder Valley myself over the years, I can personally attest to the potential heat challenges everyone attending, as well as performing, were likely to have faced at that show.) 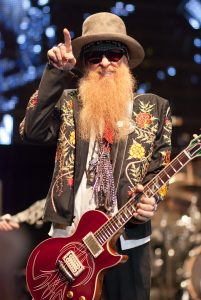 For the record, and for all you fellow Foghat physical-media completists keeping score out there, in addition to the self-titled debut album’s inclusion in the Foghat: Original Albums Series and The Complete Bearsville Albums Collection box sets respectively, it also appears as part of the two-fer import Foghat – Rock ’n’ Roll 2CD combo from Edsel Records. (Curiously, Essential/Castle Music didn’t include Foghat as part of their own reissue combo series.)

Just this past month, Friday Music reissued Foghat on vinyl via two color options — translucent gold, and translucent blue. The LP was mastered by Joe Reagoso from the original Bearsville Records tapes, and new liner notes by Roger Earl appear on the back cover. (Some signed copies are still available at:   https://www.foghat.biz/collections/vinyl 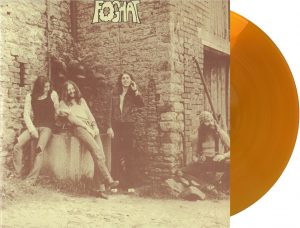 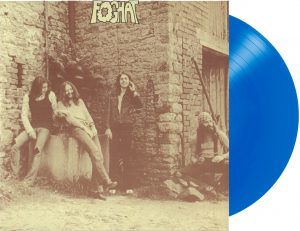 The album’s opening track, a rip-roaring cover of the Willie Dixon-penned, Muddy Waters-stamped come-on blues classic “I Just Want to Make Love to You,” was an instant smash from the moment anyone ever dropped a needle on the LP, and it reached No. 83 on the Billboard Hot 100 singles chart. The song has remained a staple of Foghat’s live set to this day, and the truly thrilling 8½ minute version of it that appears at the end of Side 1 on August 1977’s Foghat Live cemented “I Just Want to Make Love to You” as being one of FM radio’s most cherished tracks. 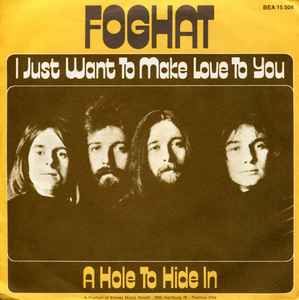 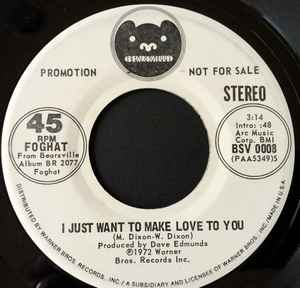 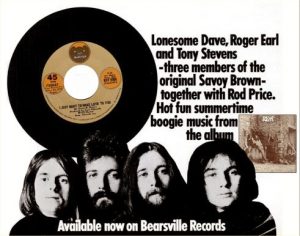 The debut album’s other eight songs are a fine mixture of originals and covers, including Lonesome Dave’s “Trouble, Trouble” (featuring spot-on honky-tonk piano from Roger’s older brother, Colin Earl) and the entire-band-credited bill collection blues of “A Hole to Hide In” (“mailman stay away from my door”) — not to mention signature covers of Chuck Berry’s “Maybelline” and Bobby Bland’s “Gotta Get to Know You,” the latter having been written by Andre Williams and Deadric Malone. Foghat reached No. 127 on the U.S. Billboard 200 albums chart and has since been certified as Gold by the RIAA, meaning it’s sold 500,000 copies to date. That said, we all know Foghat has sold way more than that by now — so I say it’s high time for a recertification!

At this point, I think it’s best to let Roger tell the tale of Foghat’s backstory origins in a mostly unencumbered in Q&A fashion.

Mike Mettler: You recorded Foghat at Rockfield Studios in Monmouth, Wales. Before your intersection with Dave Edmunds occurred there, Foghat went through an audition process of sorts first, right? 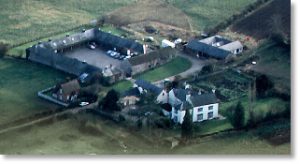 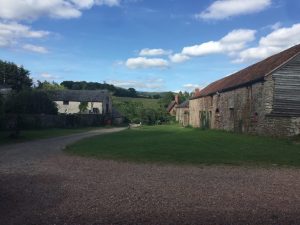 Roger Earl: Yes, before we even had a record company. It was at the end of 1971, and Albert Grossman [the founder of Bearsville Records] was coming over to England with The Band, and Todd Rundgren was in tow. We rented a room in this bar in Northwest London — a little club, really — and we set up there to play for Albert Grossman.

Now, I knew who Albert Grossman was. He was the manager of Peter, Paul & Mary, Bob Dylan, Janis Joplin, etcetera. He was “the man.” He was a monster. Well, he wasn’t actually a monster (laughs), but he was a beautiful man. I liked him, and I immediately connected with him. 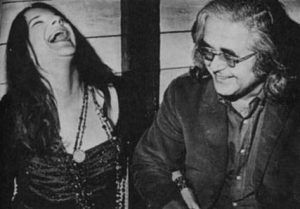 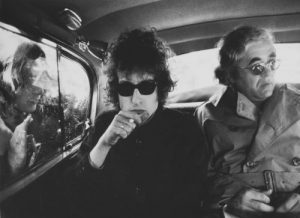 Anyway, we played about six songs, I think. After we stopped, he said (Roger adopts a deeper tone of voice), “Well, uhh, is there anywhere we can get some tea and biscuits?” And I said, “There’s a place across the road.” We all went over there, and after the tea and biscuits came, he said, “Well, uhh, let’s do it.”

And even to this day, I still get chills thinking about it. If Albert Grossman’s saying, “Let’s do it,” it means all we have to do is be great and get it right. Albert will be there for us — and he was. Albert Grossman was a real character.

By the way, everybody else in the world turned us down. Even the minor record companies — they all said no. But not Albert. 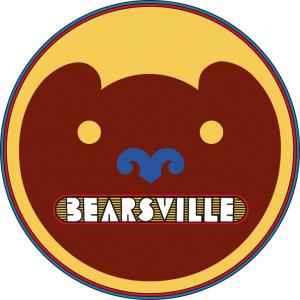 Mettler: Was there one thing about Foghat he zeroed in on? Can you pinpoint what he liked — was it a song, a vibe, a feeling? What do you think it was that sold him on you?

Earl: I think he decided he wanted an English rock & roll band on his label — and I think we fit the bill, honestly. Albert saw something there he liked and said, “I think you boys can be on my label.” And it was a very fruitful adventure. 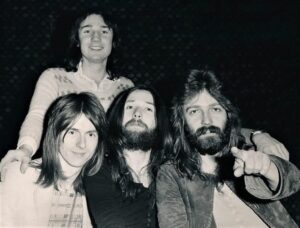 I wouldn’t like to presume what Albert heard, but he obviously liked us because a couple of weeks later, he sent me like $10,000, which was a lot of money!

I had to book studio time at Rockfield, where we decided we wanted to work because of Dave Edmunds. Up to that point, I’d never met Dave Edmunds. We liked his work, the sound of his records, and the band he used to play in, Love Sculpture. I drove down to Rockfield to book some time there. Dave Edmunds had the evening shift, and we had the day shift. There wasn’t much of an overlap, but there was some crossover time. When Dave Edmunds left the studio, we would move in, and our engineer at the time was Kingsley Ward, who owned the studio — really cool guy. 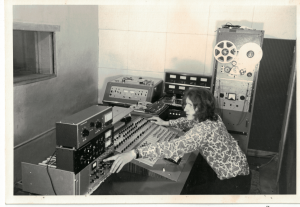 Our playing was okay, but it didn’t sound — well, it was never sounding quite right. Tony Outeda, our manager at the time, would go in there with us when we’d listen to Dave recording what he was doing. We’d hang out with him, and talk. And it sounded fantastic. He had these huge Tannoy speakers, and they would take your hair out, and blow your eyes out. Maybe that’s why it sounded so good me! (laughs)

We just loved the way Dave Edmunds’ music sounded. Ours was nowhere near as good. I believe it was Tony Outeda who said to Dave, “Would you produce our record for us?” We could play, but we weren’t producers and we weren’t engineers, by any stretch. And Dave said, “Well, I’ve gotta finish my record first”— which he did. [Titled Rockpile, Edmunds’ first solo album was released in January 1972.]

That’s when I think the magic of making Foghat music really started happening — working with Dave Edmunds. He was something else. And I’ve said it before, but it deserves to be said again — our first album wouldn’t have been anywhere near as good or anywhere near as successful had we not talked Dave Edmunds into helping us out. And we needed a helping hand! (laughs)

The story of Foghat’s July 1972 debut album is just too darn big for only one FoghatStory, so please come back next week for Part II, wherein Roger Earl takes us song by song through the entire record. See you then!!