Hello fellow Foghat fans and welcome to the fourth and final installment in our month-long series celebrating the 50th anniversary of Foghat’s self-titled debut studio album Foghat, which was released by Bearsville Records on July 1, 1972. 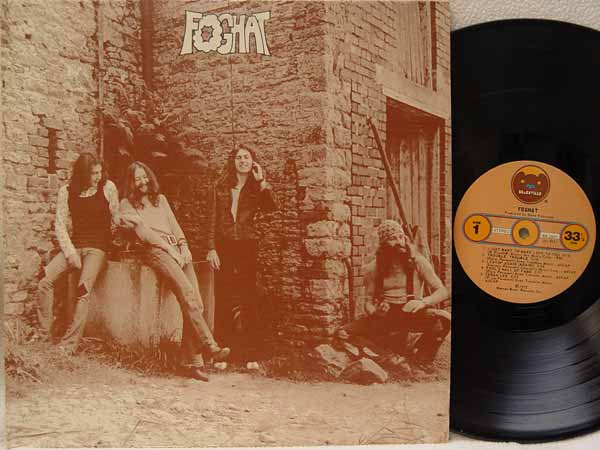 As duly noted in our previous three FoghatStory episodes, Foghat was produced by Dave Edmunds (Love Sculpture, Rockpile), and the album’s wholly electrifying 38 minutes of blues-soaked rock set the table for a band that continues to salute their roots while forging full-steam ahead into the 21st Century every time they hit the stage.

In Part III of this series, which posted here on July 16, founding drummer Roger Earl focused on key Foghat tracks “Trouble, Trouble,” “Leavin’ Again (Again),” and “Gotta Get to Know You,” plus he detailed the invaluable contributions to the album made by a pair of Bearsville recording engineers who went on to bigger and better things — namely, Todd Rundgren and Nick Jameson.  Here in Part IV, Roger and I conclude our in-depth conversation about Foghat by going over the ins and outs of five other tracks on the album including “Fool’s Hall of Fame” and “A Hole to Hide In,” plus he confirms the origin of the illustrated character on the back cover and where the band name Foghat definitively came from — and whom it initially referenced.

Mike Mettler: We were just talking about all the travel imagery in “Leavin’ Again (Again),” but now it’s time to get into the fourth and fifth tracks on Side 1 of Foghat, “Fool’s Hall of Fame” and “Sarah Lee.” 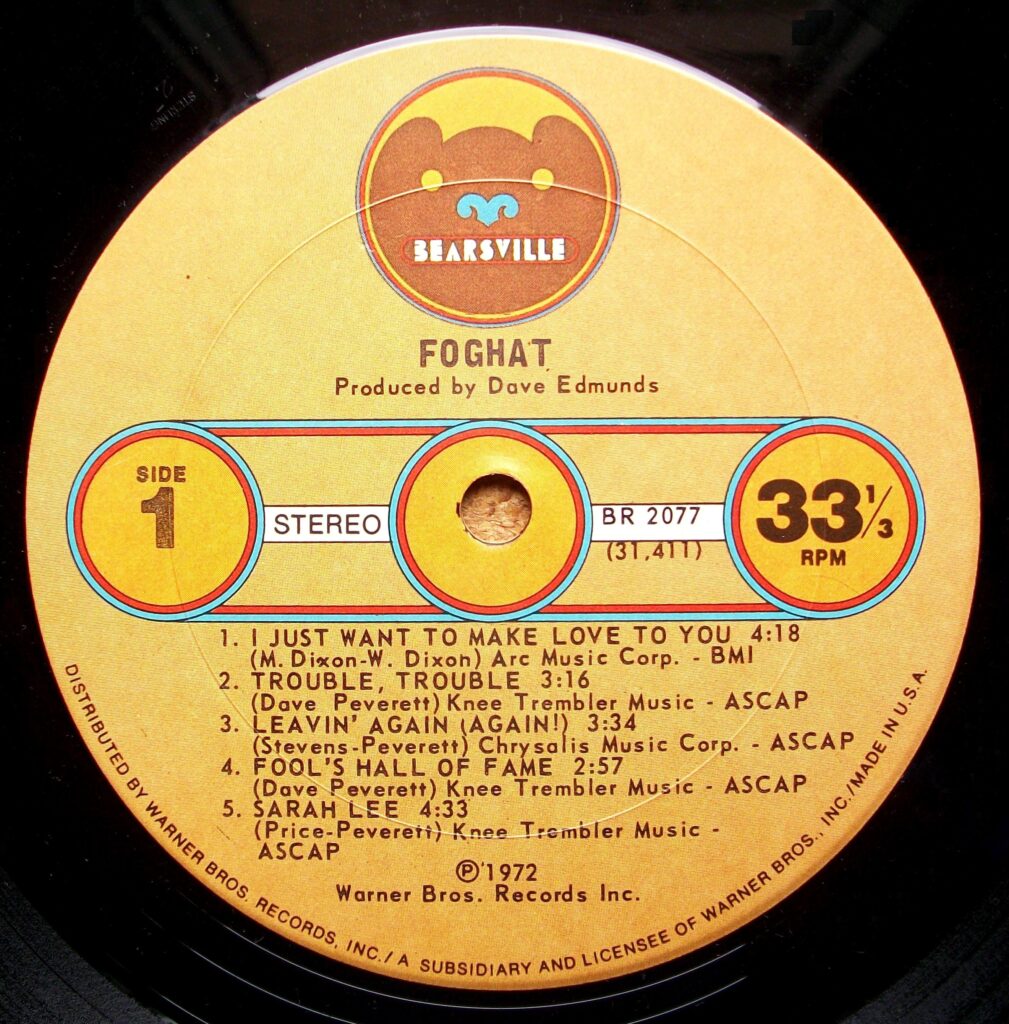 Roger Earl: “Fool’s Hall of Fame” was the very first song Foghat put together. When Savoy Brown were out in San Francisco, we had a meeting with Kim [Simmonds, Savoy’s founding lead guitarist] and the manager, Harry Simmonds. They fired [bassist] Tony Stevens, and they offered [Lonesome] Dave and I some kind of strange percentage to stay on, but we said, “Nahhh — but we’ll be in the band for as long as you need us, Kim. We’ll play for as long as you need us, but we think it’s time for a change.” [Roger, Lonesome Dave, and Tony Stevens subsequently left Savoy Brown officially to form Foghat with slide guitar maestro Rod Price in 1971.]

Then we went back to my [hotel] room. I had my practice pad and Dave had an acoustic guitar, and he played “Fool’s Hall of Fame” — which I always thought would’ve been a terrific song for Fats Domino, because it had that sort of New Orleans-y kind of thing to it. 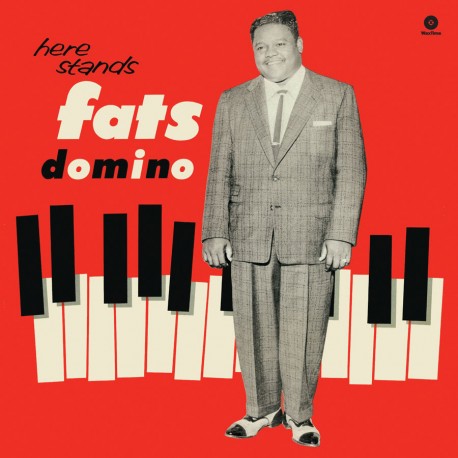 Mettler: Yeah, “Fool’s” totally has that kind of N’Awlins feel to it! I love that.  Earl: I think Todd Rundgren may well have been in the studio when we were rehearsing that one, and he helped out with some of the arrangements and some of the drum fills. Well, hold on — actually, “Sarah Lee” was the one Todd helped out on. Thank you, Todd!

Mettler: Todd the Mod does it again! Don’t we also have your illustrious brother Colin Earl playing piano on this record too? 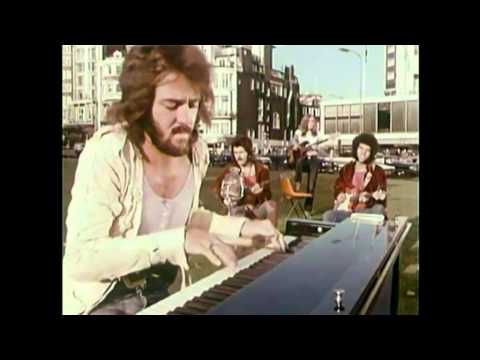 Earl: Yeah. He played on “Maybelline” [Track 2 on the Flip-side, a.k.a. Side 2]. Nobody could play like Colin. (Roger holds up his copy of the original Foghat vinyl) I know this is my mother’s copy, and I’ve just noticed something. There’s a little “x” beside “Maybelline,” and that’s my mom’s writing on it. It’s a bit faded, but I recognize it.

Mettler: That’s such a great thing to have. And since you just held the album up there, I see that infamous illustrated “Foghat” character on the back cover, right next to the scripted track listing. Where did that illustration originate? Earl: Dave. Dave did that. I guess that was the first version of Luther Foghat.

Kim Simmonds was The Incredible Gnome, and Dave was (sings), “Jaxman”! There was an instrumental on one of the Savoy Brown albums called “The Incredible Gnome Meets Jaxman” [Track 4 on Side 1 of Savoy Brown’s March 1968 album, Getting to the Point]. Jack was his dad’s name [and also Dave’s middle name]. Dave always had lots of comics — like superheroes and stuff, so he was (sings again, like the Batman TV show theme), “Jaxman”! I seem to recall it was the day we were going up to London. Dave and Rod [Price] were in the car with me because I was the only one who had a car at the time! (laughs) Tony had a car as well, but he lived in London. We were going up there to look at the album, as the art people had done up the logo and the cover — though I may be doing an injustice to Dave, because maybe he did that [logo] as well. I don’t totally recall — but it looks like Dave’s handiwork.

Mettler: I was gonna say, that logo on the front of the album does look stylistically similar to the illustration of Luther Foghat, to a degree. 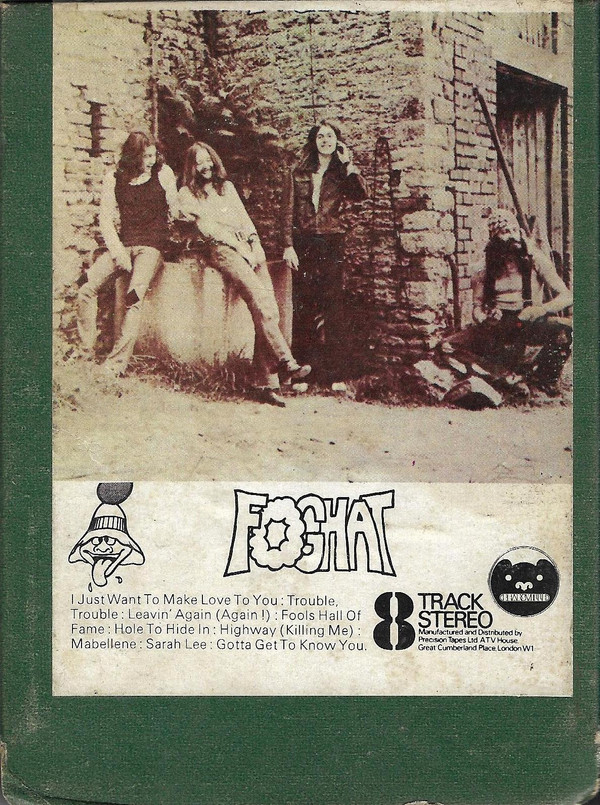 Earl: It does. Dave was an artist, and I was an artist too. As somebody once said, “You’re a f—in’ piss artist!” (both laugh)

Mettler: (chuckles) No comment! And while I’m thinking of it, can we confirm the Scrabble game origin of the band name? Is that a true story?

Earl: Well, it was from a Scrabble game, yes. Dave was playing Scrabble with his brother John, so the story goes, and Dave spelled out the word “Foghat.” His brother said, “No! That’s not a word!” And Dave said, “Yes it is!” So, of course, Dave eventually ended up being right, and John was not. So, yeah — Foghat.

Mettler: And now, it’s in every dictionary in the world, technically speaking.

Mettler: Exactly right — the name defines itself. Didn’t that guy in Rolling Stone write something like, “That’s Foghat, not Hogfat”? [This statement appears as the opening sentence in Bud Scoppa’s quite positive review of Foghat, which was published in the September 14, 1972 issue of Rolling Stone.]

Earl: We’ve been called a number of things, yes. (chuckles) I like the name.

Mettler: Me too. Let’s talk about the songs on the Flip-side of Foghat that we haven’t gotten to yet. And I should note it’s deliberately called the Flip-side on the back cover and not Side 2, so somebody had to make that call too. 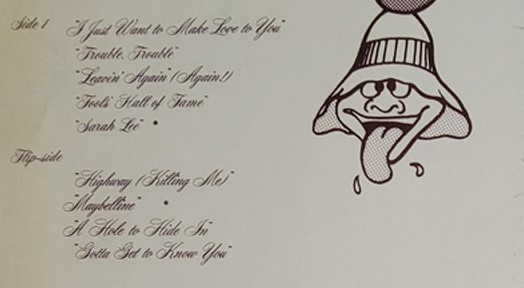 Earl: The Flip-side — that might have been Dave as well. So, “Highway Killing Me.” I love that song — the trouble is, I don’t believe we ever played it live because it had such a slow, stomped groove. It was probably one of those days we’d been smoking, you know, something before we started playing, just to slow everything down and make it sort of like, (Roger mouths the song’s loping groove). It might have been one of those times we’d imbibed because normally, we tried to stay away from doing that.

Mettler: Right. And “Highway” specifically has this really great cymbal work from you that gets featured in the back half. That’s where you’re brought up in the mix a little bit more.

Earl: I think I may have overdubbed some of that. That’s some of Dave Edmunds’ magic there — that sort of magic dust he used to sprinkle over stuff. That song worked because of Dave Edmunds’ production, definitely.

I think we probably tried it at rehearsal or something, but I don’t think we ever played it live. It didn’t quite work. Whereas in the studio, it was one of those things where it just worked. Tony Stevens made this really sparse [bass] lick (mouths the slow groove). It’s difficult to play songs like this onstage, I think, because youthful enthusiasm takes over — like, “1-2-3-4. . .” No no; it’s too quick!

Mettler: I totally get that. Well, the next track on the Flip-side is obviously a longtime live favorite, “Maybelline.” 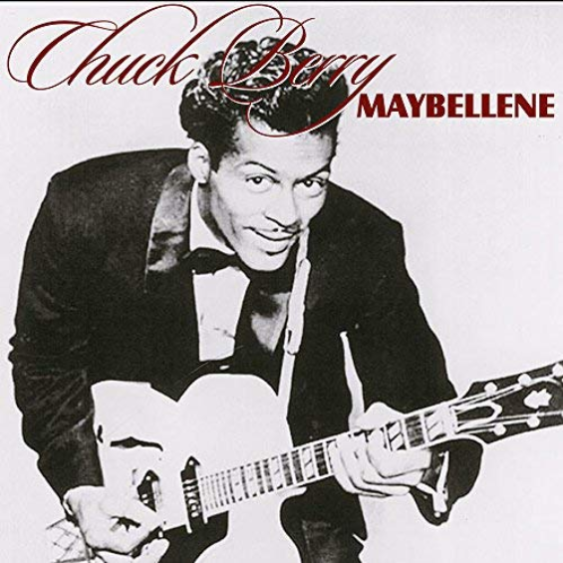 But I don’t know if people were entirely happy with our version of it because it was obviously (pauses for effect) much too fast. That was no more than two takes, and it might have been the first take. Those background “woo-hoos” are Tony Stevens. He was really excited about that. And he was a great bass player too.

Mettler: Agreed! The next song on the Flip-side is “A Hole to Hide In,” which is just a great title for a song unto itself. 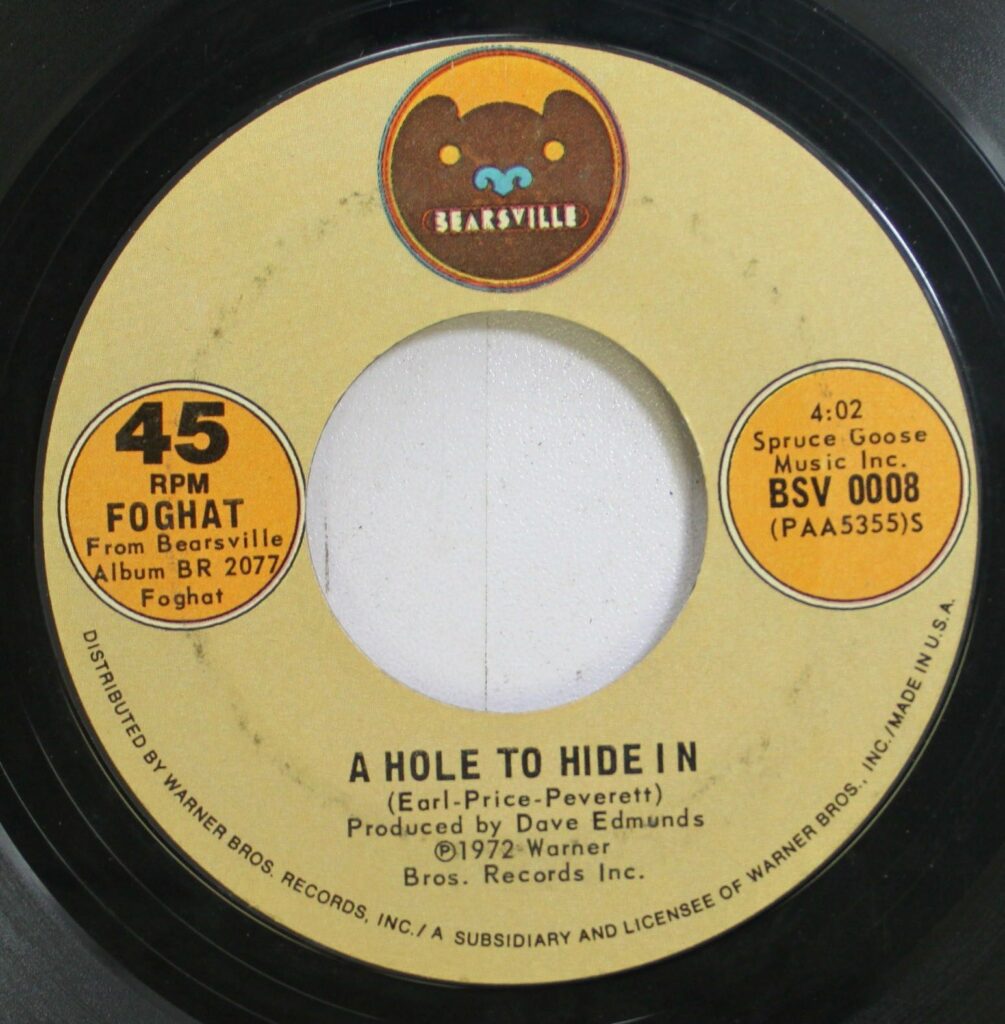 Earl: “A Hole to Hide In” is one of the few tracks where I was given a writing credit. I did write a few words — or word, singular — or maybe like a phrase or something, but for some reason, I got credit on “A Hole to Hide In.”

Tony Stevens didn’t play bass on that. He was back at his mom’s house in Willesden, and the rest of us were recording. He took the weekend off, I think, but we were 24/7 until the record was done.

That was one of my favorite tracks, and the bass player on it was John Williams — a great bass player. Actually, I think Dave Edmunds might have played a rhythm guitar on that one as well. He wanted to get in on the action because he liked that song. It was a typical, straight-ahead Foghat groove.

Mettler: You’ve seen Dave Edmunds in the years since the Foghat album was completed, right?

Earl: Yes. The last time we saw Dave Edmunds, we had gotten the original band back together in 1990-something, and we played the House of Blues in [West Hollywood, California, on October 21, 1994]. Dave Edmunds was closing the show, and the guitar player from the Stray Cats, Brian Setzer, was also there.

We had a brief moment together. He was getting out of his limo, and we’d just finished doing soundcheck. “Oh, hello Dave, how you doing?” [Lonesome] Dave was there when we both said hello to him, and then he had to go do a soundcheck. I remember seeing the show too. He was fantastic.

Mettler: It’s great to hear that. Ok, last thing. Can you give me your overall assessment of this album? What does it feel like to hold the Foghat album in your hands, literally 50 years later? 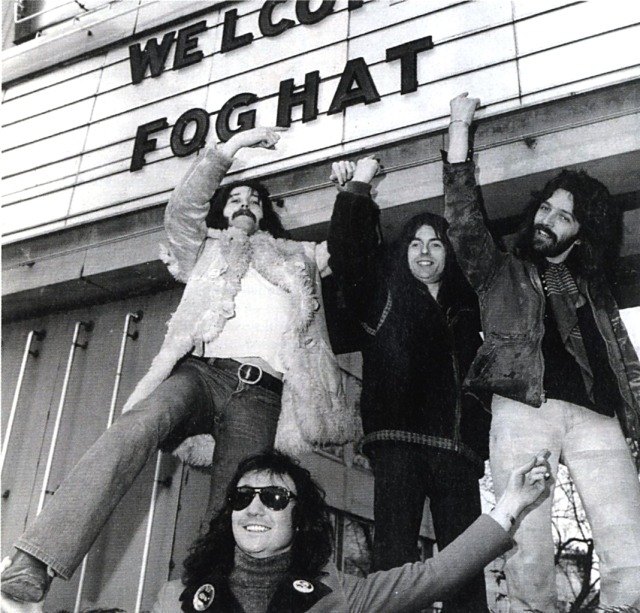 Earl: (looks at the vinyl) This album’s really old. It’s really old — and brown. (both laugh) No, actually, it was old, right at the beginning.

I have super-fond memories of making this record, especially with Dave Edmunds — but also with the band. We were all in the same boat. We were all very tired at the time. And it was also a time of, “it’s make or break for you.” The first record — you have to get it right, or as right as you can.

And we did put in a lot of time and effort. There was never a moment when we said, “That will do.” In fact, as I’ve said to you before, without Dave Edmunds’ masterful influence and production on this album, I know it would never have been as successful as it was.

So, yeah, I was really proud of this record. I remember my friends and family were very impressed with it. It was a great record. In fact, I don’t think there’s one record we’ve made that I’m not proud of. 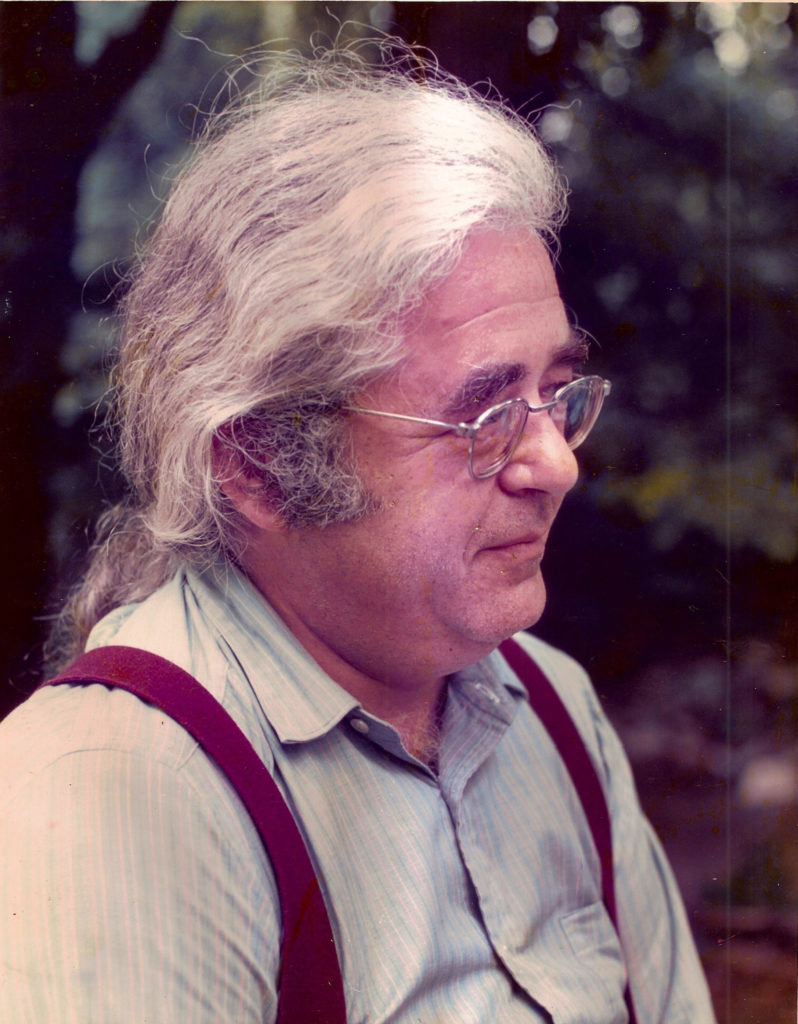 But like I said earlier, without Albert Grossman [founder and head of Bearsville Records] stepping in and saying, “Hey, well, let’s do it,” after everybody else had turned us down — it’s moments like that one that count. Younger bands have asked me over the years, “How do you get to be famous?” And I always say, “Be in the right place in the right time.” It’ll happen with a little bit of luck, and meeting somebody like Albert Grossman, who can do it — and he did it for us. Without him, we wouldn’t be here.

Keep an eye on this space for many more in-depth FoghatStories to come — all of which are the precursors for the officially authorized Foghat biography by author Mike Mettler that we currently have in the works! Stay tuned!!